I first heard about Turn in 2013 when I was lucky enough to see the previous year’s winner Ellen Turner, perform her work ‘Car Door Moment’ – a daring renegade performance, once seen never forgotten.  When last year the name ‘Contact’  was being thrown about like confetti by so many visiting artists, it seemed I was destined to get there, if only for the opening night.

This year Turn 2016 took place once more at Contact Theatre in Manchester. A programme, spread over two nights, celebrated five years of Turn at Contact with eighteen performances, across the three studio spaces and the video installations in the theatre foyer.

Starting with the ‘Stream Project’ installations, two large screens are set up, one showing ‘ A Searching Mind…’ is purely passive, you view a silhouetted dancer on a bridge. The second ‘Wired 2’ has an interactive element. By holding a bespoke device – looking a bit like a divining rod – with sensors built-in, you could affect the figures on-screen. They too are in silhouette, they resemble the figures you find in dance video games, but to my surprise, I find they are doing recognisable contemporary moves. A really good idea combining elements of gaming and dance, using the heart and pulse rate to alter the on-screen action: a fine start to the evening.

A look around up to the mezzanine above, reveals a group of pigeons. After seeing one pigeon you find there are quite a few if you look for them. Pigeons inside the building – something about bringing the outside in perhaps, including the wildlife.

The first performer was previous Turn Prize winner Hull’s Jo Ashbridge – Read below, how she made a successful return to the stage, after a two-year absence from dance due to illness.

Ushered into a space that looked like a school gym, we take a seat on the floor, fifty or sixty of us sat cross-legged on the floor. The two figures in orange have been dancing all this time. By removing his bright orange jacket, he becomes someone other to his dance partner and by waving it through the air, he becomes the expression of flag-waving protesters, that dominate 24 hour news feeds.

The stark lighting, the absence of any staging, lends the cleverly titled ‘Inner Terra’ by Bridget Fiske + Co.  a directness. There is nowhere to hide, no shadow, no front or backstage, we are watching from all sides.

There’s mention of Belgrade and a sort of student exchange, as individuals of different nationality, were placed together to find their own way of communicating. If you don’t have language in common what are you left with?

There is a gesture, a hand movement cradling the face that speaks of tenderness, the hand then leads guiding the other. The interaction between the two has been physical with lots of energy, and lots of floor and it’s from the floor, that we glimpse something of the effects of ‘restriction, lack of freedom and chaos’ as described in the programme notes. An afterthought: do the orange suits become like prison uniforms?

Tonight we saw a ‘work in progress’ and speaking with Bridget Fiske and Joseph Lau, I learn that they wish to take ‘Inner Terra’  outdoors to perform to different communities, I’m sure they’ll not be short of takers.

Returning once more to the main stage, it is a lighter tone that Lizzie J Klotz’s ‘To Suit’ takes. Danced by Alys North and Charlie Dearnley, reading the description, the work explores human relationships using the framework of animal behaviour and avian courting rituals. The piece left me with more questions. I can see now the awkwardness at the start, the shy figure being dazzled by the radiant blue creature bursting onto the scene, but in the avian world it is often the male who has the brilliant markings. I was startled by the vocalising, strange sounds repeated mantra-like. Lovebirds calling?  There’s J.S. Bach in the background and the crowd are responding to this romantic tale that has a certain retro European feel. 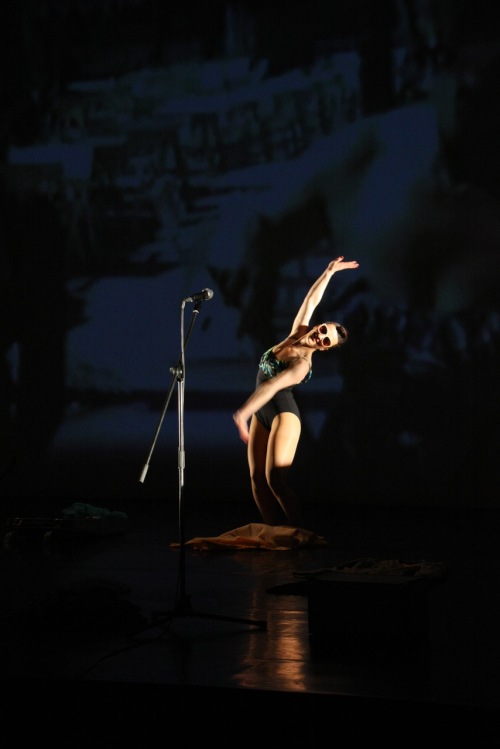 Another dance to film this one by Lauren Tucker and an excerpt from her work ‘This is What we Left Behind.’ If I was handing out the awards, this is the piece that would win it for me tonight. From the moment she pulled herself on stage, under the weight of the world, the chair on her back and the three suitcases dragging her down, I was hooked. The footage from ’64 is extraordinary, the hustle and bustle of Routemasters crawling down town streets, the vintage sheen and what is that voiceover? Spinning a tiny globe plucked from the open case, we are invited on a journey with Lauren’s Great Grandmother.

The answer to her question ‘What can we learn from the woman in our past?’ is many-fold. So much to learn about different cultural attitudes, past times, expectations. Taking a suit from a case she becomes her kin, sharing all that she was her hopes and dreams. The enthusiasm for beach holidays and recreation, beautifully recreated by diving into the ‘pool’ meanwhile on the screen, shots of the pensioner’s plunge play out.

There’s affirmation overload as nuggets of sage advice flutter to the floor. Now in a sparkly raspberry number she is a tap dancing flapper girl. It is the last moments that seals it for me as a tear threatens, she sinks into the chair clutching the tiny carriage clock. Such a beautiful way to tell a story, to remember a loved one now gone: to connect with the past.

A brief interval and a chance to swap notes with others, then it’s back to our seats to be greeted by the sight of a single box, in spotlight, one side of the stage. A voiceover relates a tale of faith and survival in the wilds of Alaska, asking the atheist, after he prayed in desperation for rescue, he now believes, by the simple fact he is still alive. An interesting proposition to set up a dance, I suspect if our existence is threatened we will happily reach for any form of salvation.

Feet appear from beneath the box and begin to move outside of it, then a figure dances with the box like a shell. The figure is Giorgio de Carolis and the work is called ‘Blind Certainty’ There was much floor work in this piece and holding and supporting of limbs – which will no doubt turnout to be a dance thing, if I look it up in my dictionary of dance terminology. The box is a metaphor for blindness, a notion that is pushed further, with a playful reveal. The bells peal instilling a sense of urgency, if you are not going to open your eyes to the truth now, then maybe it will be too late for you.

It’s been a long night but we still have three performers to see the next, is for me and many others I spoke to, the most stylish of the night. The most technically proficient maybe or perhaps the one, that when you see it you just get that feeling that you are watching performers, that just have a natural gift for dance. I loved every minute, from the opening, where we find him leaning on her. She is propping him up supporting him, being the force that moves him.

In a break from the long form, here are my notes about ‘Long and Short of it’ by Tom Bowes Dance.

Permanent state of Collapse, like a relationship. Catch me, hold me, don’t fight me. Chase me, follow me. Can the music get any more beautiful? (Sigur Ros drenching us in sonic glory) Now courageous with a Hollywood pose, now strong for each other.

He’ll leave her in the end.

There’s a sideways dive, repeated more than once, as Jenny Reeves arms pointing straight out, throws herself across Tom and it works, it just really works. You can feel the passion the connection between the two, from the back row of the theatre. The teasing description ‘You may be able to see us in blackout. We’re ready to begin’ gives no hint of the intricate enmeshed and stylish choreography that explores co-dependency and the dysfunctional relationship.

Then to a space I think I heard referred to as ‘The box’. It is a black space more intimate, capacity thirty or so and it’s the third ‘dance to film’ piece of the evening. Gayathri Ganapathy dances a short piece in a classical Indian style known as Bharatnatjam. A centuries old dance that originated from the temples of Tamil Nadu. She becomes like a sculpture herself, reverent with defined poses held, showing great technique and skill.

With this piece ‘Mirror N You’re On’ Gayathri’s intention is to dance in perfect synchrony with her screen self, which she achieves with unerring timing. I note with a smile, that she gives a little wave acknowledging her screen ‘sister’, right at the beginning of the piece. It’s not a form I know much about at all, but having tried the ‘light bulb’ move in a workshop once, it is fun to emulate.

Then there was but one piece left, for the opening night of Turn 2016. A surreal slice of someone else’s world, combining solo dance and bizarre spoken word, that could have been lifted from Dali’s dream diary.

Anyone for, ‘ 5pm playground tunnels?’ or ‘find a worm in a coke can.’ Somewhere I heard a General bark out orders, then the words are lost buried somewhere in absurdity and madness. By way of contrast ‘A gift to the garden,’ as Holly dances commanding the space. The repetition somehow reminds me of a music box or an automata, the feet fixed yet minutely turning, the dance and dancer, affording some inner moment of calm, a salve to his haphazard ranting.

Truly inspirational. For someone who is not averse to a little wordplay herself, I found this final piece, hugely enjoyable. Danced by Holly Rush,  written and acted by Hamish Rush the ‘Yes Sir Act’, is a surreal comic delight, but wait what was that… does something lay hidden in the final stanza?

I have more to say, about dance, Contact Theatre and Manchester in general, but I’ll leave it for another day. I expect you’re exhausted after all that, as were we after talking long into the night, about the dances we’d seen. The group consensus was that we want to see more dance, different styles of dance and dance theatre, in-town, out-of town, in all manner of settings.

Turn 2016 is presented by Word of Warning, Contact and Dance Manchester  http://www.wordofwarning.org/hab/turn