One big blog, one huge blog, one massive blog, one humongous blog: thanks Hannah. I remove my boot and a shred of Louise’s Social Service Report falls out it reads… no I think it’s private there’s a reason it was shredded. Right off the bat Louise Wallwein’s performance of Glue has been my highlight of Contains Strong Language, brought to you by the BBC and Wrecking Ball Press and Hull 2017. 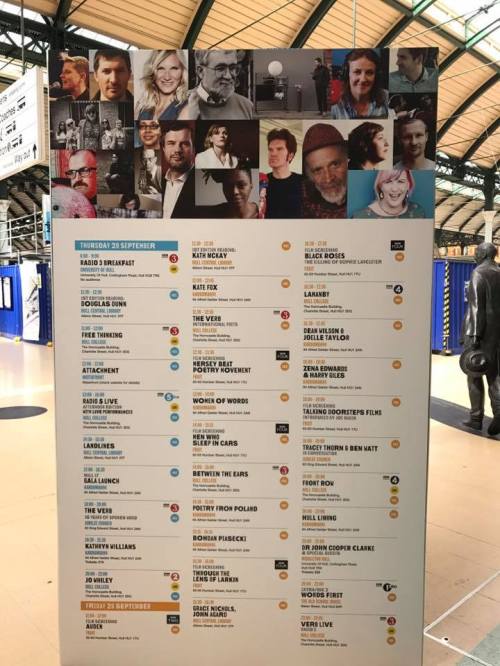 I was hoping for answers, some clue as to whether it is wise to look, find and make contact with your birth family. I came away not knowing what I should do, but I think I might do a gig in my hometown, the place of my birth all the same. Louise took her papers, all her papers that told her who she was and jettisoned them in a confetti cannon courtesy of Walk the Plank. After spending so many years waiting for that part of her story, she is super brave for doing that. But I understand why she did it. If I did likewise it would be a poor cannon indeed, just one side of A4 not even a picture.  Who thinks it is okay to let a child out in the world without a picture of their mum or dad? A brilliant show I am very glad I got to see it.

Let just get this out the way, I was very fortunate to be able to work with Kate Fox on the show Women of Words/Queens of the North and thank you all who saw our show and saw/heard the snippet on The Verb live on BBC Radio 3 later the same evening…. but maybe someone else ought to say something about our show, rather than I.

I think Dean Wilson is fearless

In this town he is peerless

It is best to steer clear of imitation when conducting examination…. so I won’t… suffice to say Dean flew the flag and represented Hull with modesty, generosity and class.

As did Vicky Foster, on that stage she came of age, following Hannah Silva a true artist of the word – who breaks boundaries with every utterance, every syllable, a masterclass in mic control –  not one faltering step, she owned that stage, and has earned the right to be one of the 17. The tears that ran down during her set, were tears of pride, they surprised me, I wasn’t ready for that, but Vicky is. Voices in the pine cones?  I was right there holding it to my ear: a phone call from the past.

And our Joe. Joe Hakim, he told me he was going to pull out Two Coppers in a Subaru for the first time in eight years, hope you dropped Fake Plastic Socialists too and just for old time sake Special Brew Blues… the poem that made you, upstairs Haworth Arms, 2005.

Back to Hannah Silva for a moment, her politics had me doubled up with laughter and open-mouthed with awe as she took apart and rebuilt Cameron’s Liverpool speech, mash-up just isn’t a good enough word to describe her approach. It was a bit like CSI when they rebuild a document from a million fragments to prove who the guilty party is. Her deconstruct of Pain left me in a very dark place and retreating further still and beginning to feel very uncomfortable, Prosthetics undercuts the glossy heroic narrative favoured by television.

Paul ‘Pansy Boy’ Harfleet planted a pansy for me – as he did in a number of Hull locations, for other Hull folk who have faced homophobic abuse. My question remains, now memorialised, how will that place feel to me in days, weeks, months to come? I don’t question the work he has done, raising the issue of homophobic attacks and wouldn’t it be great, to see his book in every school, repairing some of the damage that Section 28 did to an entire generation? I think it will take many, many more years and institutional change before everyone can feel safe on the street.

Helen Mort offering up of a piece of her father’s heart in Ablation, the discarded fridge and cracked cup in Rag and Bone, the endless beginnings for the impetuses to climb, and the owl with the runway stare, those are the things that will stay with me, that and the glorious sight of Sheffield poet Helen bathed in fancy lighting inside Kardomah 94, right there on my telly when I got in last night.

And then the Manchester utopia/dystopia pieced together in diorama, by Michael Symmons Roberts. Newsreaders with eyes closed, portents foretold during a taxi ride, the end of books, the end of books… The Future of Books, a poem with a message that should probably be engraved on a plaque above the College library door. Finally, the long and involved process of shaking out an old coat. I like to find the forgotten things in the fuzzy corners, like a breath mint or an old bus ticket.

I spoke with Imtiaz Dharker on the complexities of writing verse to fit choreography, wonderful to see contemporary dance alongside new works of poetry. 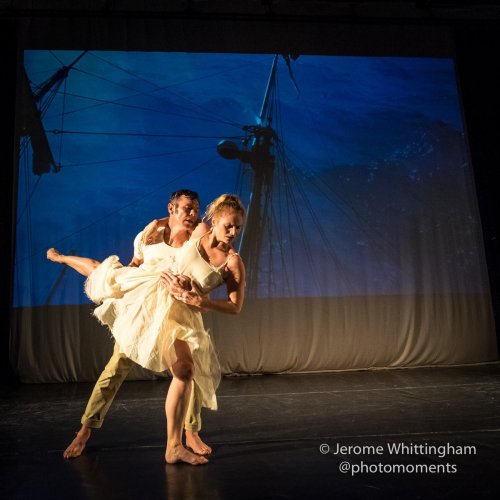 I marvelled at the idea that kids today get to study Joelle Taylor in the classroom. English lessons must be so much fun and serious and challenging and rewarding. I declined the offer to inspect her damp pits, how could she get nervous with that kind of commanding presence and explosive delivery? I revelled in the Orcadian filth of Harry Giles, has there ever been a voice so determined not to be defined: they continue to be an inspiration to me.

It was after seeing Zena Edwards that I had the courage to open my Freedom set with a song. I’m not saying my voice is on a par with hers, but she planted the seed in my head, and I’m grateful for it. Zena’s set was full of love, warmth, huge amounts of skill and openness. The musicality and characters from her during the snapshot of city living, seen through the eyes of an Eastern man who drank rum, I say East I think he was Turkish – his dog ate turkish delight that’s for sure. that story was told, the picture described so clearly, I can see the unshaven man looking in the mirror, I can see his dog at his feet, I can picture him weaving through the streets with his camera… perhaps more importantly I could clearly hear his voice coming from Zena. 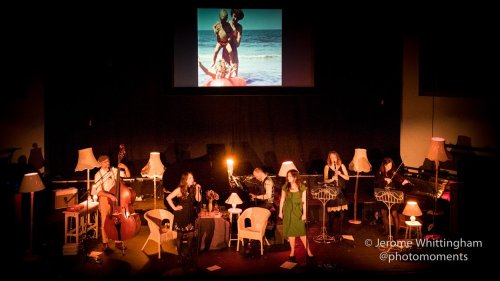 I couldn’t see everything. In between my own commitments to the festival, I tried to see as much as I could. My Contains Strong Language came to a close to the ethereal northern tones of The Unthanks as they opened the songbook of Molly Drake. The arrangements were beautiful, the setting of a dressed up Jubilee Church stunning, seeing a tiny baby Nick – footage from the family archive – was somehow surreal. The poetry particularly the one about the two different kind of worlds – the daytime world and the world that exists between three and four in the morning – when inner demons are left to roam freely – those words hit home. For the second time a tear escaped the corner of my eyes as the idea of time being both enemy and saviour, was firmly planted.

There’s much more that could be said about Contains Strong Language, like remembering that Fred Voss could do funny on the factory floor and by owning more radios than Rumbelows, the Latvian outfit Orbita blew everyone’s circuitry. Katherine Williams singing gorgeous words and playing guitar without whiskey, but with a sliced finger. Blood, sweat and tears and some delicious leek and potato soup – thank you Ian McMillan.

Brilliant, beautiful and bloody well done all of you. For more updates: #Hull17CSL

A place to play…

An artist needs a place to play. Last week whilst at the opening of Lou Hazelwood’s new exhibition Intersections  – inside Queens House on Paragon Street until 1st Sept  – the topic of infrastructure for creative progression, or rather the lack of it was raised within the group. END_OF_DOCUMENT_TOKEN_TO_BE_REPLACED

Text from Into The Light LGBT50

just a moment to be heard. Listen up as I speak my words

Into the Light LGBT50 A Participant’s story pt2

This is it, the night before the big day. This time tomorrow the cast of Into The Light will have entertained everyone at Duckie’s Tea party in Hull… twice! END_OF_DOCUMENT_TOKEN_TO_BE_REPLACED

Have you seen her…? Visible Girls Revisited exhibition at Artlink

By hosting Visible Girls Revisited by Anita Corbin, Hull becomes the next chapter in a story that began in 1981. With camera in hand a young non-conformist Anita began capturing on film the spectacular diversity within the many groups and tribes of women, who existed outside of the mainstream.  END_OF_DOCUMENT_TOKEN_TO_BE_REPLACED

Into The Light Mass Dance Tutorial

Gary Clarke and Hull UK City of Culture 2017 invite you to join thousands of others in a mass dance this summer. All you have to do is watch the tutorial, learn the dance and join us in Queen Victoria Square, Hull on Saturday 29 July END_OF_DOCUMENT_TOKEN_TO_BE_REPLACED

‘Girls aren’t the delicate flowers they used to be’

Delicate Flowers written and directed by Mark Rees of Single Story Theatre Company tells the story of Barbara Buttrick, a Hull woman who has rapidly risen to iconic status, through the telling and re-telling of her achievements in women’s boxing. Born in an era when women were expected to play the good housewife, have tea on the table, look pretty for their man, Barbara proved with her determination and fighting spirit, that women should be allowed to box, finally winning the Women’s Bantamweight Championship. ‘Not bad for a girl from Hull’ says Karen, a young boxer inspired by Barbara’s story END_OF_DOCUMENT_TOKEN_TO_BE_REPLACED

Behind The Decks With Hull DeeJays

There you are in your bedroom with your finger on the pause button, cutting out all the chat, recording the Top 20…  creating the perfect playlist… maybe you progress to recording vinyl tracks through a stack system… later still you try to blend the sounds.  END_OF_DOCUMENT_TOKEN_TO_BE_REPLACED

And The Winner Is… Hull Dance Prize 2015

Hull Dance Prize made a welcome return to the cultural calendar on Thursday 22 October. Despite the two year hiatus, the audience packed out the studio theatre at Hull Truck again. I estimate the event could have been sold twice over, due to the amount of people still wanting tickets.

The four companies competing for the cash prize of £2,500 differed in number with a trio, a duet, a quartet and a solo performer. Each piece was very different in approach, content and tone. END_OF_DOCUMENT_TOKEN_TO_BE_REPLACED