OUTing The Past 2019 at Leeds City Museum

OUTing The Past is an international event series celebrating LGBT+ history, presented by Schools Out UK. In February 2019 during LGBT History Month OUTing The Past held a one-day conference in its newest Hub city of Leeds. The speaker-led event held in the Thoresby Room of Leeds City Museum joined a wide programme of public events, conferences and creative interventions, spanning the U.K. the U.S. and Scandinavia throughout February and March.

The Welcome Address was given by weatherman Owain Wyn Evans, who underlined the purpose of the day and the wider aims of LGBT History Month and OUTing The Past: namely the ‘importance of drawing out LGBT stories in our history, to see where we are now and the distance left to go’.

In welcoming delegates to the event Owain spoke about how Leeds and Yorkshire had ‘welcomed him with open arms; a Welsh, sometimes camp always flamboyant weather presenter.’ Perhaps most telling was the moment he described the changing attitudes within broadcasting: Owain is able in 2019 to refer to his husband without hesitancy live on air.

The afternoon session was opened by Ash Palmiciano heralded as the first trans actor in Emmerdale playing a trans character. Ash describes growing up without any trans characters, until seeing a documentary on TV which inspired them to come out to their parents. After making the decision Ash talks about having ‘brain space to pursue dreams of becoming an actor. Finding and working with company Gendered Intelligence they hope to normalise what it is to be trans.

“We are on the cusp of something in LGBTQI in 2019, conversations are opening up and it’s completely okay to be who you are” Ash Palmiciano

Introducing themselves was Cllr. Hannah Bithell LGBT Member Champion and Compere for Outing the Past Leeds.  They introduced the speakers in turn, fielded questions from the floor and kept the considerable crowd in order throughout the day.

AIDS ACTIVISM IN THE 80s

First speaker was Mick Ward who spoke about direct action by protest group Act Up Leeds during the HIV/Aids epidemic in the eighties. He explained how council workers would use flamethrowers in public areas torching up to 300 yard area of homophobic attacks to eradicate the threat of the virus; how switchboard operators downed headphones refusing to work alongside gay colleagues. He explained that the climate was one of fear, ignorance, prejudice and a lack of funding leading to a lack of action by the government to understand the virus and how it was transmitted. Coupled with the introduction of clause 28 which not only affected the classroom which is often the first thought but led to local authorities systematic discrimination of gay men and women.

Highlighting the absurdity of Clause 28 and wholesale damage being done to society, Mick described how councils would advise certain employees working in the public health sector with the following: ‘A self-professed homosexual ought to consider whether they should be giving advice on sexual health.’ He added that today these same organisations who had acted so offensively are now sponsors of today’s event and supporters and advocates of LGBT equality.

Outing the Past Conference Leeds Feb 7 2019 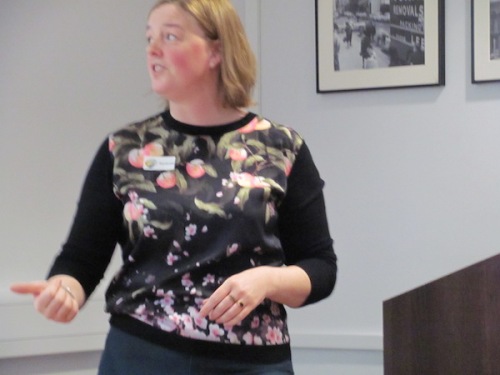 Angela Clare (pictured above) is collections manager for Calderdale Museums in her role she is currently responsible for Anne’s home, collections and archives at Shibden Hall located just outside of the commuter town of Halifax.

After hundreds of years of relative obscurity Anne Lister may be about to become a household name with the forthcoming TV Drama ‘Gentleman Jack’ starring Suranne Jones. The excitement about this upperclass woman who lived from 1791 – 1840 is that she kept a diary.  not just one diary but thousands of pages which detail her life as a landowner running tenant farms, owner and occupant of Shibden Hall a grand ancestral homestead and her love life. Angela uses this quote from 1821 just incase there is any confusion as to Anne’s orientation.

“I love and only love the fairer sex and thus beloved by them in turn, my heart revolts from any love but theirs” Anne Lister 1821

Susan Philips describes Leeds in the eighties as a hotbed of Lesbian organisations. PM Margaret Thatcher declared families had to be made up of both mother and father denouncing lesbian families. The media described them as ‘pretending’ or ‘playing at parenting’ both hugely offensive and divisive. This was a time where a biological father with little or no capacity for caring for a child, could legally be given custody by outing an estranged wife.

Some of the talk surrounded the issue of absent fathers and the possible effect that has on a child growing up. Susan repeated the mantra that all children need to hear regardless of how they were brought into the world.

“We chose to have you, we don’t believe you need a father, I (or we) wanted you”

A talk on Trans Representation and Gender Expression in Rock Music presented by musician Kate Hutchinson. Kate describes her day job as tackling homophobic, transphobic, and bi-phobic bullying in schools, which would surely give hope, to her eleven-year old self.

It’s Thursday, It’s seven o’ clock. It’s Top of the Pops. It is 1981 and the appearance of Culture Club’s Boy George has got the whole country asking – including Kate’s dad – ‘Is that a boy or a girl?’ Seen as transgressive by the tory media and more evidence of the collapse of societal norms – but actually nothing new as Kate would point out with a quick history of notable artists who dared to explore and expressly be unashamedly themselves.

The full title of this presentation was War into Peace A Trans ‘Twenty in a Hundred’ Perspective, which might have readers thinking about the oft touted percentage figure of gay people in any given group. It is not referring to a percentage figure… it is an acknowledgement and recognition of the 100th Anniversary of the RAF combined with the twenty year anniversary of open trans military service.

Choosing three persons to focus upon Roberta Cowell, Caroline Paige (herself) and Catherine Lawson, builds a framework to explore attitudes to trans in the military, the battle and sacrifices some had to make in order to serve. In this way we hear first of Roberta, the WW2 flying ace involved in ground attacks in a Typhoon aircraft. Roberta was shot down in ’42 and spent the rest of the war as a P.O.W.  from where, she made at least two escape attempts.

Caroline Paige’s journey was different from Roberta’s in that she served long enough in the forces in the RAF, to make waves. Caroline describes early on in her career being navigator on F4 Phantoms facing off with Soviet Bombers during the Cold War, later she would move on to helicopters in the Falklands and anti-terrorist activities in Northern Ireland. Highly capable, experienced and award-winning tactical officer, who was trans. At that time the rule was there would be a complete ban on trans in the armed forces. If discovered Caroline faced being fined, kicked out of the RAF and potentially imprisoned by the military police.

In the blurb it describes Olivette Cole – Wilson as representing a BAME perspective, she quickly reminds the room, she cannot do that, she can only talk from her own experience.

Stonewall LGBT Rights Charity was set up after Section 28 and was largely white middle class professionals, journalists, activists and establishment figures. Matthew Paris, Ian McKellen and Baron Michael Cashman, Lisa Power and more. Some of the names I recognise others I don’t. Olivette describes Stonewall as being a ‘motley crew of grassroots activists, and corridors of power’ with the group being characterised by qualities of acceptance, tolerance and passion. 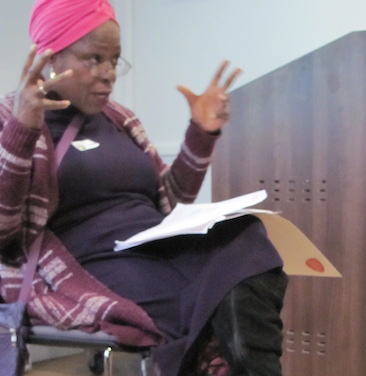 “Coming out all the time even in your prime,” Olivette Cole – Wilson

It’s a powerful idea – perhaps coming as a shock to some-  an idea that echoes the themes that have run throughout the day. The way institutions are led by straight society and how the establishment treat aspects of difference.

An LGBT Life: Then & Now

Our final speaker was LGBT Poet Laureate Trudy Howson who escaped a depressed racist mill town in Lancashire to follow her dreams at a London theatre school. Trudy recalls seeing Rachel Welch in the movie One Million Years B.C.  in her suede bikini, and describes it as the moment she knew she liked women.

Trudy became a writer and performer doing agit prop theatre in shopping malls, conducting poetry readings and going on Pride marches all the while her heroes were evolving plucked from pop culture and real life. She describes a process of putting her mouth where her life was in order to tell queer stories.

Introducing a poem called #Shout-out she explains that during the times of Section 28, she could not have read this poem. And although the poems come across as simple, with basic rhymes it is the times they are written in or about, which makes them resonate.  In 2012 Trudy was asked to write a poem for the London Olympics, something that could inform the Met. Police when it came to interacting with LGBT communities. She hoped to change hearts and minds with her poem Hero.

Outing the Past Conference Leeds Feb 7 2019

First time for Leeds hosting OUTing the Past,  show the importance of community celebrate diversity. Significantly it is time to emphasise the’H’ in LGBT History Month. the personal stories shared are often lost in the past through, illegal nature, layers of secrecy, to have the opportunity to sustain those histories for future generations is kind of cool.  John Donegan Partnerships Co-ordinator Leeds Museums and Galleries