Never have I felt such a buzz around an Artlink show as there is around Alien Sex Capsule by artist John Walter and for the next six weeks, until Sept 29th, it is here in Hull for Square Peg at Artlink.

Addressing an excitable crowd John Walter thanked Artlink, Square Peg and Hull 2017 for his invitation to come and show his work. Cradling a courgette – a surprise gift from his parents who have travelled up unexpectedly to celebrate the exhibition launch – and causing Sarah Reagan the BSL interpreter, no end of fun, John Walter the ‘aesthetic terrorist’ gave a brief overview of the show to a packed gallery sipping especially made cocktails amidst the courgettes in woolly hats and capsids.

Describing himself as ‘A Doctor of Alien Sex’ and casually dropping in words to his introduction like ‘condom fatigue’ and ‘chem sex’ and crystal dick’ the title of the video on the monitor screen. ‘That’s taking crystal meth and losing your erection…’ John explains twinkling, as the cameras flash left and right. 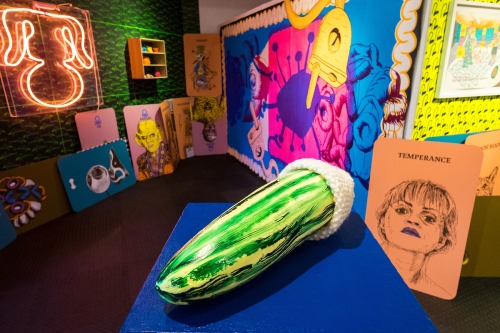 This level of explicit language and frank discussion of sexual matters has rarely been seen – if ever –  at an Artlink show on Princes Avenue, perhaps rarely seen in a public space in Hull.

Thanks to Sarah I can now almost confidently, sign the words ‘Kings Cross £4 Sex Club’ – the seed and starting point for what would eventually become Alien Sex Club, of which the bespoke Hull version Alien Sex Capsule, is a cross section.

‘It’s an exhibition about the pleasure of risk; about science and homophobia. HIV is no longer a death sentence here, there are treatments in the form of antiretrovirals. The Alien Sex Club is a world that explores what HIV means here in the West. It’s a maximalist world that challenges the way HIV is represented in visual art.’ 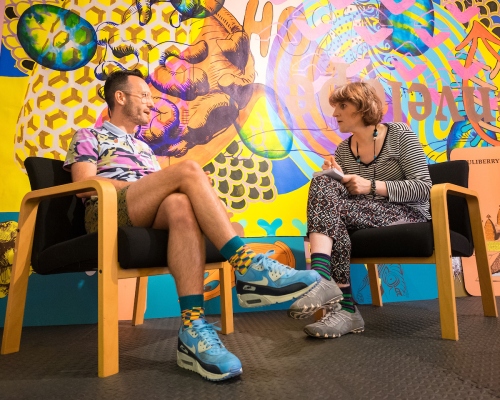 I asked whether John’s work was activism, whether he was engaged in a campaign. He suggested that he felt that it was activism but activism in an informal way, with no prescriptive message: a carnival of information for the audience to consider.

‘It’s about having fun while still thinking about the serious side – the two are not mutually exclusive.’ John Walter

There are recurring images in the show, the aforementioned capsid – an irregular-shaped protein shell which carries the HIV virus, as it inveigles its way into the body. A bit like somebody trying to sneak into a club with false I.D. perhaps? The complex nature and layered narrative, derived from the studying the way capsids behave on a molecular level, have become the building blocks for the next stage of John’s illustrated exploration of sex and science. 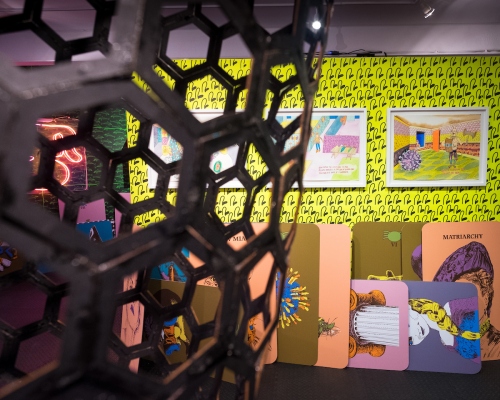 The cruise maze is used in the show as an organisational device, to explore the physical and digital worlds and the psyche. The architecture of the cruise maze is found in sex clubs, saunas and toilets, Alien Sex Club plays upon how the design of the space accentuates and facilitates, opportunities to meet and interact with others.

The Hull show incorporates the idea of the cruise maze with partitioned spaces, so that a visitor can be hidden from view, imitating something of the psychology at work when cruising for casual sex. The cruise maze is an environment that encourages role-play and fantasy, digging deeper into the narratives of how games are played, to attract a lover.

Taking the idea of the maze one step further, John also considers digital space, stating that dating apps like Tinder and Grinder, use elements of the cruise maze to keep people online, chat rooms become those private intimate spaces, flicking left and right is akin to walking through a club and checking each other out.

‘The space is transformed intoxicated with colour. It is important to have work like this, exploring in an inclusive way for audiences, what HIV means in 2017’ Phil Batty Director of Public Engagement & Legacy for Hull 2017

John uses a maximalist approach to his work – essentially lots of different ideas and imagery meshed together to create a world, he describes it as being like the act of putting a portrait in the middle of Tokyo, versus that of hanging the same portrait inside a white cube.

Everywhere you look you are faced with an alien visual landscape, bright yellows, hot pinks, lurid greens bombard the senses. Screens show looped footage of glitchy eighties DIY styled visuals, a weird mash-up of sex ed. clips – no sex education for a generation in the U.K. other than straight, because of the criminal Section 28 – rave culture and late-night sex ads, with exotic patois/polari phrases flashing up in garish fashion. Just wait till you get a load of the floor. ‘It’s a crime we are all standing on it.’ I overheard at the preview. 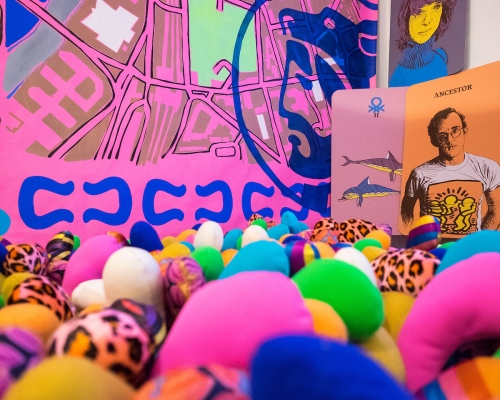 I described Alien Sex Capsule as feeling like a rumpus room, there is even a soft toy area… but to see only a surreal playground of sex, is to miss the carefully considered scientific approach that plays an equal part in the work.

The surrealism continues with the over-sized customised Tarot cards leaning against the surfaces, which lend a Carrollian touch despite depicting contemporary figures, such as Quark the Ferengi entrepreneur barkeep from Deep Space Nine and the matriarchal Dame Maggie Smith. The deck is loaded, subverting gay tropes from literature, film and television, imagery fetishising body types and character traits, through jargon, wordplay symbolism and a dose of cartoonish viruses.

The idea of hospitality is inbuilt in John’s world, his previous shows at Homotopia Liverpool, and Ambika P3, London included a performative element: a bar set up where visitors could meet, have a drink, a Tart reading, talk and ask questions about the show.

I suppose that’s the biggest thing to take away, there’s so much more going on just beneath the surface; the stories being told; the language being used; the theatre of it all and the sex. There are some first class goodies for visitors to take home with them including badges and patches, plus the beautifully illustrated boxed Tarot sets.

So who is Alien Sex Capsule for? It’s for anyone who has an interest in sexual health, so that should be everyone. Yes the narratives, wordplay, imagery and concepts are things that gay men are more likely to be familiar with, things that some might even see as taboo. The science of HIV, the debate about condom fatigue and the use of PrEP – a drug in tablet form, taken before sex to reduce the risk of getting HIV – these are questions relevant to all sections of society.

Recently we’ve glimpsed behind the curtain of the drag kings and queens of Sierra Leone, now from behind a closed door comes a day-glo lamp illuminating bodies and minds… yet the show Alien Sex Capsule by Dr. John Walter couldn’t be more fun and inviting if it tried.

One response to “Alien Sex Capsule Changing views of HIV”