Into the Light LGBT50 A Participant’s story pt2

This is it, the night before the big day. This time tomorrow the cast of Into The Light will have entertained everyone at Duckie’s Tea party in Hull… twice! In the past few weeks we have gelled as a company, more than that, we have had to become very close, in a very short space of time. We are very much all in it together, the sense of unity and purpose runs strong, throughout the forty-two community dancers.

We have got used to the idea of making work, we understand that for work to develop there has to be changes, we accept that things that work in the studio, don’t work so well on site and vice versa. No longer are we troubled by the sound of choreographer Gary Clarke saying, ‘Listen up, there’s been a few changes…’

Designer Ryan was on hand tonight to pass his critical eye, over the costumes and how they looked on us and in-situ. The costumes are pulled together from a muted palette of beiges, creams and charcoal colours, on purpose so as to not distract from the storytelling in the choreography.

If we had gone with lots of feathers and sparkle, it would have felt too much like Pride. Into the Light is a standalone piece, that conveys different aspects and expressions of lgbt experience.

The story we are telling begins in the fifties and sixties, inside underground clubs and finishes in the present day, with a mass dance celebrating our years of freedom to be who we choose, without the threat of being criminalised. For some of the company the levels of systemic persecution of a group of people throughout the decades, for their sexuality or gender identity, has come as a shock. 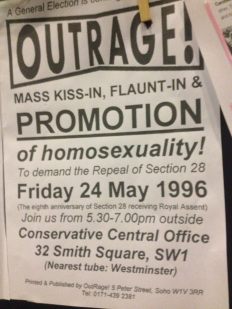 There has been a definite learning process throughout the past three weeks, as issues and events have been explored so as to better convey the emotional content behind the movement.

We even had a debate on the word ‘queer‘. I am super proud of the group for being able to accept the use of the word, for embracing the idea of queer being a way of thinking, a politic, a belief system, a word that represents freedoms and not a derogatory term used by ignoramuses.

As the process has gone on I have found I have been given and I have accepted more and more responsibility. If you had said I would have written ‘a fast forward version of LGBT history’ two weeks ago I’d have laughed. Not only have I done that, I have risen to the challenge of performing the ‘bridges’ as they are known, to hopefully thousands of people in Queen Victoria Square, in just a few hours.

I am used to writing for my own performance, where I am on stage on my own, just me. With Into the Light I am writing and performing within a much bigger ensemble piece. The pressure is on. I have to hit my cues, I have to remember my positions, my dance steps, and to remember to enjoy it.

Into The Light Picture: David Lindsay

And boy have I been. I love spending time with the cast practicing what we know, learning new stuff, surprising myself when I realise I can do it. I think there is not one person in the cast who hasn’t come to really love doing this show. We believe in it, we believe it is good, we believe it is bloody good, and we all hope we do it and each other justice come showtime. 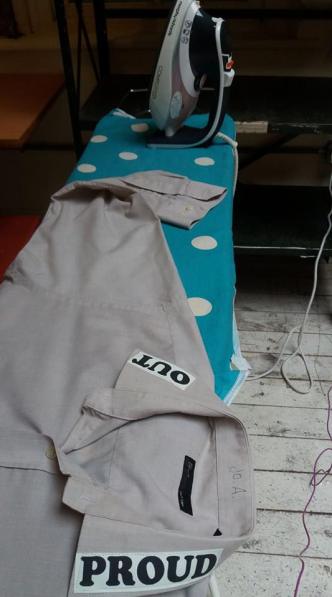 We did the full dress rehearsal – in costume hair and make up – in a squall tonight. I was stood mic in hand screaming my words at a scattering of bemused techs and security staff, feeling a little like Prospero beating back the waves. It made a difference having the live band tonight, the final element in the show, aside from the brass band. I’m guessing that when we do see and hear the brass band start up, at that moment it will all become very, very real.

We are very aware that this process comes to an end, there has been a few tears at the thought of saying goodbye, some of the cast are talking reunion. Others have looked at new dance and performance opportunities coming up in the city and signed up for those. I certainly hope that through this process we have turned more people on to dance in Hull; a very immersive audience development process.

Wish us all luck or as they say in the dance world – Merde!

I rather like this response I found on Dance Enthusiast – Thanks so much! and remember…..Don’t suck!” STILL TIME TO LEARN THE MASS DANCE!