All we ever wanted was… gig theatre

Stamp the back of my hand, straight in to see the band, at the bar a tog grabs me for an All We Ever Wanted Selfie. Buy a drink and to the front to dance and sing to the best band in the city. This is a nightclub; this is Welly and this, this is gig theatre.

Written by Luke Barnes, Directed by Paul Smith ‘All We Ever Wanted Was Everything’ – title derived from uber cool art school post punk band Bauhaus – is an anthem of three acts, spanning three decades. A universal tale of boy meets girl, East meets West, in Hull that is, set against a backdrop of emergent political forces and a new generation, determined to defy the weight of expectation set down by the one previous. All the while there’s a ruddy great asteroid hurtling towards the earth, carried on an irresistibly cool synth wave.

The crowd builds in number, as the band The Holy Orders, erupt into trademark frenzies from their well-crafted epical numbers, featuring astute lyricism and potent driving rhythms (other bands are available) A band no stranger to experimenting, their finale is a relentlessly driven instrumental that plays out well over twelve exultant minutes.

The Holy Orders on tour at Milo’s in Leeds Picture: Ben Brady

The drama unfolds on stages and gantries on all sides of the space. Word to the staging and set design by Bethany Wells and Natalie Young for this beast of a show. Early in the piece we meet ‘Brian’ – played by Joshua Meredith – a nightclub bouncer struggling to give his daughter ‘Leah’ – played by Bryony Davies – everything she wants in life. 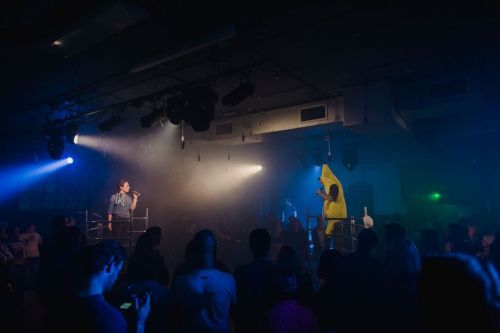 A chance meeting with ‘Kimberley’ played by Emma Bright, over a book about a certain wizard, will lead to little Leah, finding little ‘Chris’ (Kimberley’s son) played by James Stanyer. All this is explained in the first few minutes, far better than I ever could, by MC and Narrator Marc Graham.

Looking like a cross between Lou Reed and Ted Tudor Pole, with a twinkle and boundless energy, he guides us through the years, as we follow the fortunes of our two Hull families. Taking in Brit Pop, Indie and Electronica with an original musical score by James Frewer that immediately takes you back to those bombed out days of the nineties, the noughties and now: with more pop culture references than you could throw a man with a stick at.

Did recent events overshadow the residual message a bit? Maybe, maybe that’s inevitable… maybe all was heightened, seeing as I saw it on the night before the nation went to the polls, during what has been a very bad year for Britain – putting aside for a second, the whereabouts of that wayward chunk of space rock…

‘Ambitious, dramatic, and good fun: a gig and a play about hopes and dreams and what happens to them – a great night out.’

A mix of musical genres are showcased throughout the 11-day run with artists including Chiedu Oraka, Emily Moulton, The Hubbards, Black Delta Movement concluding with End of Level Baddie. EOLB v The Asteroid anybody?

The move by Middle Child to include a wide variety of artists speaks directly to the company’s singular aim of, making theatre for the non-theatre goer. Middle Child continue to prime new audiences with award-winning work in non-traditional spaces, across disciplines, proving again the value and potential found through collaboration.

All We Ever Wanted Was Everything runs at the Welly Club until 17 June. Go see it, you owe it to your younger self.

Download the Free EP from The Asteroid at: warrenrecordsuk.bandcamp.com or stream on Spotify (search: All We Ever Wanted Was Everything)

Tagged as All We Ever Wanted Was Everything, gig theatre, hull 2017, Luke Barnes, Middle Child Theatre, Paul Smith, the welly club