No less than three John Moores Prize artists, are currently exhibiting work in the group show Utopia Deferred, at Hull’s Artlink gallery on Princes Avenue. Paul Collinson from West Hull, Sheffield painter Mandy Payne and Conor Rogers the youngest of the three, a recent graduate from Sheffield Hallam. The John Moores Prize is like the Oscars of the painting world and all three artists featured in the 2014 John Moores Painting Prize Exhibition. At the time of writing, Mandy Payne had just been nominated for the Contemporary British Painting Prize 2016.

Talking to Paul Collinson about his new landscapes in ‘Utopia Deferred’ can feel a bit like an art history lesson, casually throwing in isms and ists into the conversation, name checking leading artists, philosophers and essayists from Plato to Baudrillard, leading figures who have written and informed our understanding of our relationship with the world around us.

The first in the new series is positioned at the junction of post-war England – an England dominated by country estates – and today’s constant charge to own and develop for short-term gain, every square inch of property. A trademark car abandoned by joy riders perhaps, faces the dilapidated gates and crumbling wall bordering a grand residence. In one corner lays a pile of acquisition papers, immediately provoking questions over land ownership, intentional decay and the inevitable financial gains associated. 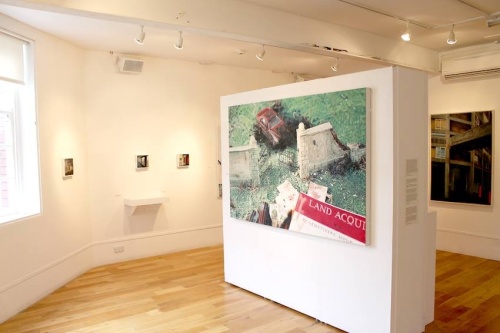 Described by art commentators as photo-real, Paul’s creations contain a journalistic narrative that repeatedly play out in the real world, the constructed landscapes contain hints and clues, that reward the persistent when deciphered. This exhibition exploring nostalgia and the picturesque couldn’t be more timely or relevant today, as Hull undergoes its facelift ahead of its year in the limelight.

‘Nobody is building for the future…we have a mania for managed and managing spaces, but who is making those decisions and to what end?’

Other works in the series reference the curbing and controlling of land in history, in particular the great tax dispute that led to revolutionary political intervention at Runnymede. The painting is dominated by the bright flash of fireworks lighting up the night sky while familiar walls, stand broken and forgotten, in ‘Subject to Contract.’

This diversionary tactic appears time and again in Paul’s paintings, what can be seen in front of you, the urban decay, graffiti and vandalism, isn’t necessarily what you are supposed to see. For example in the experiment with portraiture called ‘Cold Pastoral‘, a little history helps the viewer. Recognising the origins of the phrase ‘Omnes Cives‘ scrawled on the billboard serves as a key to unlock the conflict between the upper order and the destitute during the French Revolution, played out just beneath: the haves and the have-nots.

‘Graffiti in the right place’

Returning briefly to the graffiti that appears throughout the series, daubed on crumbling brickwork and mangled wrecks, it is interesting to hear Paul comment on the idea that graffiti is not just welcomed but actively encouraged in today’s urban design: think, acceptable colourful graffiti murals, created by Hull’s Pinky or any time authorities want to appeal to younger minds and appear trendy.

I see the paintings, fuelled by my innate anti-modernisation fervour, as being carefully constructed and considered landscapes, meting out comment on control and the commodification of land: the debate over private versus public spaces. Paul, speaking bluntly, describes his landscapes as rants. Rants over the lack of transparency over ownership, very topical, the covert measures used to limit access and the conflict over preserving our heritage and the seduction of the shiny and new and managed.

Despite the layers of historical and architectural allusion and illusion, the work remains quite playful. The photographed scenes – constructed from hobbyists models – painted large, create an arena that fires the imagination of anyone who has ever played fort or farms as a child. Enlarging the original image, lends Paul licence to play with scale and perspective, draw out detail previously hidden in the original photograph, and to draw the viewer’s eye into the work, playing his own game of obfuscation and diversion.

During a very educational hour spent with the Hull artist we debated the changing nature of urban landscape, land ownership and rights to access, and the inevitability of redevelopment, including instances where new builds attempt to appease the romantics and the new place names, reflect something of the historical usage of the land.

If history teaches us anything the seeds of discontent are already being sown in and amongst the shiny and new, bedecked with water features and the nouveau riche. The next series of photo-real paintings from this astute and insightful artist, could just as easily contain the fragments of failed city plans – the new utopia – as they do the remnants of fallen empires and seats of power.

But enough of these revolutionary rumblings, Paul remains hopeful for the future. Fiercely proud of his hometown, he sees his role as a local artist to continue to take his work outside the city, while pointing a big arrow back to Hull.

“Art without meaning is decoration, meaning without art is propaganda” (Collinson, 2016) 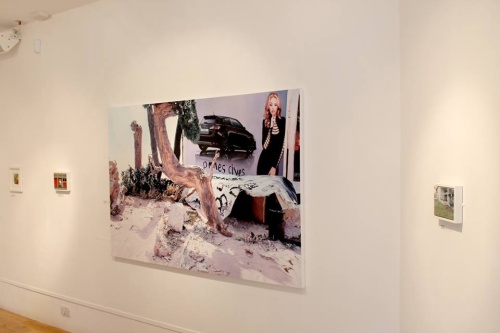 I described the Park Hill Estate, the focus of Mandy Payne’s paintings, as being ‘hard-edged square boxes‘ I expressed surprise when she told me the building had Listed status. During a series of emails I learned a lot more about her study of Park Hill how the original architects had intended for it all to be a utopian dream.

‘My aim was to try to communicate the themes of memories / loss and transience, the displacement of the established communities from the estate, capacity of a place to absorb memories and experiences and the temporality of the urban landscape.’

I’ve seen the government films hailing the high-rise as the future, living in the sky, with all amenities in one place, compartmentalised life creating communities of happy shiny new people… I’ve also seen and experienced the sink hole estates many of these places became, after years of underfunding and neglect. In the beginning, Mandy explains, every effort was made to maintain the existing strong community…

‘Neighbours were rehoused next to each other – even the old street names were used so that folk didn’t have to change their addresses. The back to back terraces they were leaving behind had poor sanitation, no heating and were damp, the new flats were spacious with central heating.’

She goes on to describe the utopian vision for Park Hill – sounding very much like one of those city planner ads as being designed to have everything residents would need including: shops, pubs, schools, nursery, doctors surgery, communal play areas and no cars… 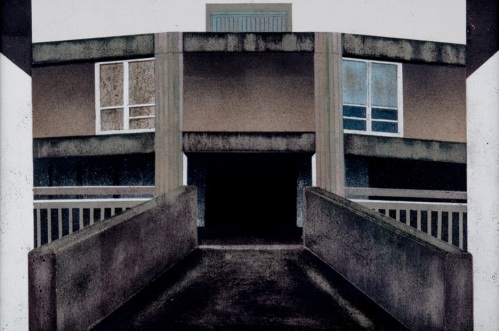 So what happened? Through her research and talking with long-term residents, Mandy paints an all too familiar picture of recession hit, down at heel, seventies Britain. High unemployment, council dis-investment, lack of maintenance, Maggie’s right to buy, changes in housing policies and with the estate housing some of the council’s most challenging tenants, all that meant that Park Hill sank into decline.

In 1998 the Grade II* listing presented the council with yet more problems, they couldn’t knock it down but they couldn’t afford to do it up. The next part of the story is just incredulous, they sold the estate for a pound. One English pound was paid by Urban Splash a property company from Manchester. Mandy reports, that in the last eight years, the estate has been undergoing regeneration.

‘At the moment [Park Hill] is in a state of transition, which makes it an interesting place to observe… it’s the old parts of the estate that I’m drawn to, where the concrete is all stained and spalled, but where the memories are almost tangible.  My ‘hard edged square boxes’ in the exhibition are made from concrete and aerosol spray paint.. I wanted to use materials integral to the estate’

And to Conor Rogers, whose work about transformation and art as object, charmed and intrigued many at the preview. I later contacted the recent graduate, about the current show Utopia Deferred and his place in it and received an equally charming and lengthy response from him.

‘I’ll think about your sponges every time I wash up,’ I write in my email destined for Conor’s Spam folder: I think he could make an unlikely connection from that.

‘There is a nice link between you being reminded of my work whenever you’ll be doing the dishes. This feeling, or idea is similar to how I come up with the choice of image for ‘You should think your sen lucky’ (sponges). You see something which in this case is a sponge and it takes you into a moment or an experience, a time, a place, an emotion or even argument against something. I think it can at times be sentimental to you as the creator but for me this isn’t a necessity, I am merely inspired by any everyday encounter.’

Conor takes an everyday object, like a cig box, a crisp packet, a pound note and uses it as his canvas ‘tricking it into being something more.’ Blending relationships between form, shape depth, colour, physicality, materiality he questions painting down to its very core, creating dialogue between the depicted image painted and the object it is on.

‘I love how something throwaway can turn into a something delicate and jewel like through a little patience…  I end up becoming best friends with inanimate objects in the process.’ 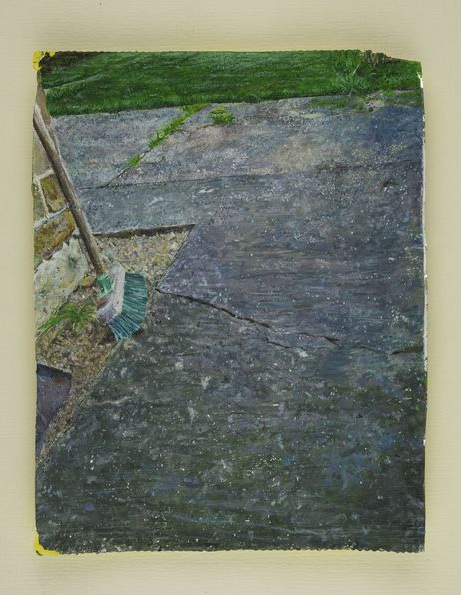 The crisp packet ’88 Calories’ depicts an everyday outdoor scene, with a broom leaning against a wall – the crisp packet may have blown into that garden, the broom may have been used to sweep up the crisp packet. The idea that the artistic response is also an object, energises me greatly and feeds into something, I am currently exploring in my own practice.

After snapping a picture of a kind couple, giving money to an old man Conor had his inspiration for ‘The Pound Note.’ He chose the pound note surface so the object referenced the image and vice versa. Conor plays with the ambiguity of the Queen’s smile and notes that the light from the underpass runs perfectly under her chin.

On the subject of: How do we dwell? A question which all three artists are asking, Conor’s response leaves me feeling a chill in the air, suggesting more than the act of merely being an inspired by an everyday encounter.

‘I think we all like to dwell on most things… dwelling can at times consume you especially if you love something.’

Utopia Deferred is supported by Arts Council England and runs at Artlink in Hull until July 2nd see website for opening: 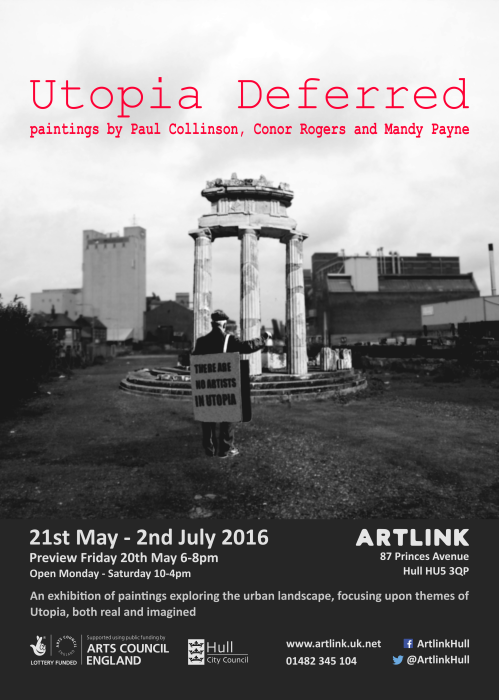