Dreaming Big: Artist returns to her roots for Pave exhibition 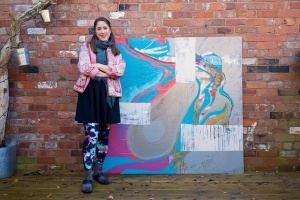 Artist Sarah Mole, who co-founded and co-curated gallery Tide on the busy avenue, has recently returned to creating large canvas pieces after a brief hiatus.

Sarah’s textured artwork is heavily influenced by artists such as Swiss-German painter Paul Klee and Spanish artist Joan Miró. Her aesthetic is also informed by the contemporary interior designs of Sir Terence Conran and, closer to home, her father, Geoffrey Mole, who was a successful antique exporter in the city.

Sarah said: “I’m a big fan of really large scale paintings, and, while the two pieces going on exhibition stand alone I also envisage and create work that would be the feature of a well-designed room. I experiment with texture and colours, creating paintings that are very layered.”

Meditation practice has had an impact on the choice of colours used in each of the pieces of work. Other influences on her art include time spent in Berlin after the fall of the Berlin wall, when Sarah saw many pieces of art that were tactile and three dimensional. 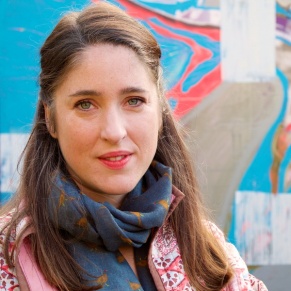 “The work I saw in Berlin, and elsewhere, made me realise that these were not just pictures but something that you really experience, something of a very tactile, textured nature.”

For the largest of the two pieces of art, Sarah’s creative process began following a flight over the Humber Estuary. The use of different materials, including special inks, provides a changing experience depending on lighting conditions.  The second piece emphasises Sarah’s decision to create work that shifts perceptions depending on environment and available light and space.

The artist, a former member of Hull band Mammal Hum, is returning to creating work on canvas after time spent working as a graphic designer and also curating the work of other artists when Tide exhibited work from 2012-13 and also at the art exhibition that was a part of Hidden Hill festival.

“I have spent a lot of time supporting other artists, selecting and curating their work, offering them support and selling other people’s work. That made me want to do this myself. I’ve painted and worked artistically since I was at school and I’m delighted to be returning to creative pursuits. It was only a matter of time and it’s very exciting for me that my work will be on exhibition in Pave. I’m looking forward to getting a response from those viewing the work and, while I’ll see what that response is, I will be creating further large scale work in the near future.” 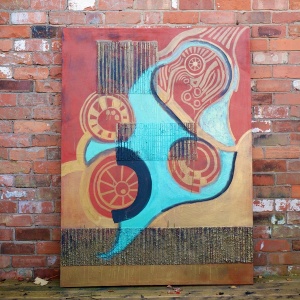 The two pieces will be on exhibition until the end of November 2015, including during the upcoming events held at Pave as part of the Humber Mouth literature festival. Sarah does not intend to sell the work on display but would consider reasonable offers and is also available to work to commission