Will You Walk Out Of Mercury Fur?

On Mercury Fur’s 10th Anniversary, Middle Child – a Hull theatre company known for creating electrifying performances – present a new version of the controversial play by Philip Ridley. Described as ‘one of the most challenging plays of the 21st Century‘ Mercury Fur has been relocated and reworked, especially for a Hull audience.

Released in 2005 – the summer of 2CB and other hallucinogens – Mercury Fur depicts a dystopian nightmare that, judging by today’s levels of terror, tragedy and lawlessness, feels far too close for comfort.

‘Go up the stairs, follow the butterflies, turn right, continue on up, step over the dead dog...’

This play not being for the faint-hearted, is the understatement of the year. The fact that producer Mungo Arney  observed in the Butterfly Bar later, ‘No walk-outs during the performance,’ underlines just how shocking and brutal this portrayal of human behaviour can be. I read in the programme, ‘The play has a reputation of shocking and offending spectators...’ There would be something very wrong with you if you weren’t shocked.

I could outline the plot, but with Mercury Fur achieving cult status, someone else will surely explain it you. I’d most probably remember it wrong anyway and start adding stuff that wasn’t there; that didn’t happen; that wasn’t real. 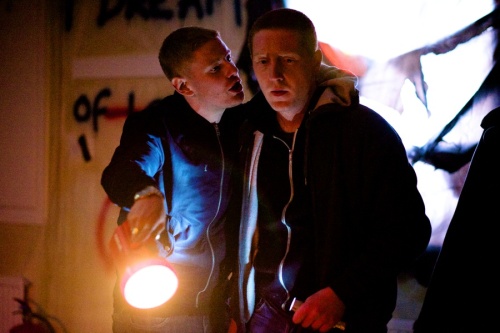 I suppose in broad strokes – pretty sure Ridley never wished for his play to be described in such a way – Mercury Fur is about loyalty, desperate and misplaced loyalty, power games, gang culture, fantasy… love, maybe redemption?  It is also about a pathological desire for stimulus: events experienced, heightened and relived vicariously through a screen or from another’s distorted and fragmented memories. And it is, in some parts, really very funny.

Tracing a line back through recent history, I can see something of the evolution of the dehumanised and desensitised, attitude to violence. Not too far back, there was a public outcry over violent and disturbing scenes on the page and a call for censorship. Then, there are the links made each and every year, between viewing violent acts on film and re-enacting them: The Matrix, Columbine, school shootings, stabbings etc. 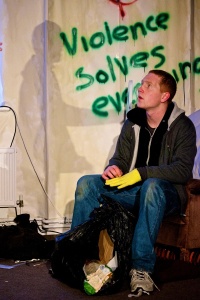 At the turn of the century there was a moral outcry over the carrying out of gratuitous assaults and filming them, a phenomena referred to as ‘happy slapping‘. More moral panic and public outrage from society arose at the prevalence and pervasive nature of viral content. Today real-life footage depicting violence, rape, torture and most notoriously beheadings, have become common currency in the digital playground.

Mercury Fur accelerates this descent, perhaps two, three, generations on. With the addition of the ultimate narcotic in the ever-mystical butterflies, whatever is left of morality is very thin: a Britain devoid of social order, enslaved to chemicals, living out its darkest, depraved desires.

Extreme doesn’t cut it, so let us come back to Middle Child’s rendering of Mercury Fur. Directed by Paul Smith, the acting from the cast is, as we’ve come to expect from MC, superb throughout; particularly Nima Talaghani as the character Naz. 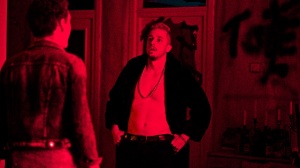 Nima gives such a compelling portrayal of the lost soul, eager to please, desperate for an invite and a double blue butterfly: he was just irresistible. Also arresting, Laurence North as Lola, she puts the rest of us to shame; utterly gorgeous. I wasn’t at all surprised that little Naz’s eyes lit up, when she arrived at the party.

Did I mention the party? Just you wait until you see the party piece.

Bravo to the company, the sound, suitably eerie like a drone soundscape… that reminds me, Rodgers and Hammerstein, Oh God! The staging; attention to detail, exemplified by the empty cans strewn all over the lav floor plus, the discarded condom I find beneath my seat. The lighting: artful, subtle and just a bit clever.

As touched upon earlier, the play has been relocated to Hull, so flat vowel sounds abound, and fleeting familiar references,  can be found in the adapted script. Really you don’t need these localisms to feel closer to the action; you are close enough already. 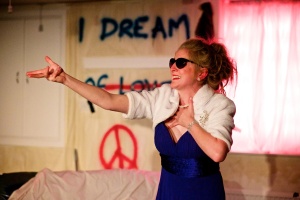 We’d joked about the set looking like a squat, the likes of which can be found anywhere off Beverley Road or Newland Avenue. The floor is covered in detritus, furniture is up-ended, the walls daubed in nihilistic slogans and graffiti.

The performance takes place in a room the size of a small office, with each of the ten nights, limited to around 40 persons seated, within spitting distance, around two sides of the ‘stage’.

It is a full length play, so you get plenty of bang for your buck, the room gets stifling and you are held captive. As it cryptically reads in the instructions sent you beforehand, ‘You may get stuck – once the party starts.’

Have I covered Aldous Huxley and The Doors of Perception; or referenced Shane Meadow’s and Mercury Fur’s particular patois? I felt it was more Dead Man’s Shoes (2004 film) than This is England, though on reflection, I can see why the comparison is made. It is Black Mirror territory, David Lynch land and if you have a taste for any of these trailblazers, then you might just go for Mercury Fur. 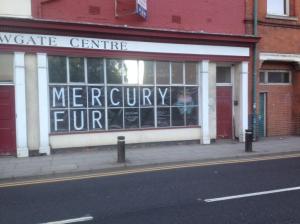 Tickets: needless to say the hottest ticket of the year, so tickets will be as rare as the white butterflies. Middle Child are particularly keen to attract non-theatregoers; those people who’d rather go to the match; go down the pub; those individuals who declare that theatre is really not their thing.

“Middle Child what have you done to me?”

One response to “Will You Walk Out Of Mercury Fur?”